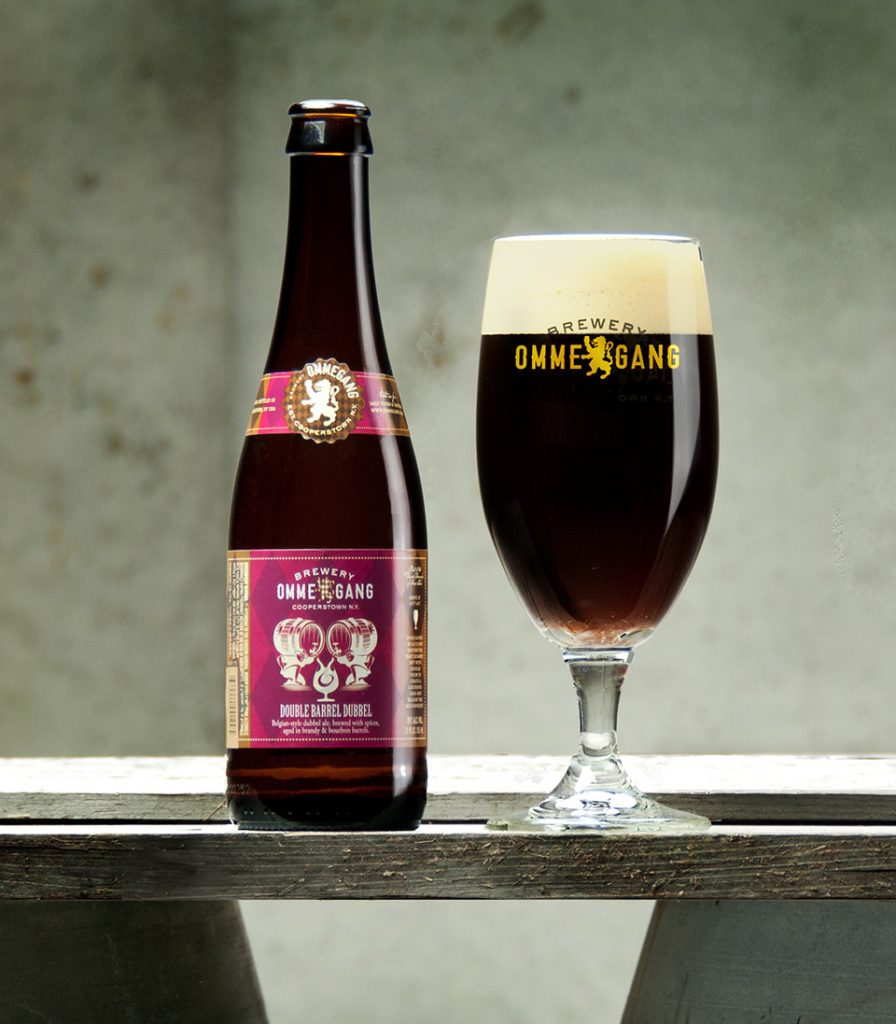 We're pleased to announce the release of a new beer this month: Double Barrel Dubbel, a beautiful blend of traditional Belgian-style dubbel aged in bourbon and brandy casks.

A nod to our first beer, a beloved dubbel called Ommegang Abbey Ale, Double Barrel Dubbel is a glorious new take on the style. This luxurious brew begins with Abbey Ale, which then gracefully ages for six months in a mix of bourbon and brandy casks in the brewery’s cellar. This blend of barrels adds an additional layer of complexity to an already flavorful beer.

From Brewmaster Phil Leinhart: "As we’ve expanded our barrel-aging program, we’ve experimented with some of our favorite core beers, trying different barrels, and combinations of barrels, to create something new with beers we already enjoy. We thought the combination of bourbon and brandy for Abbey Ale was a great one and we’re pleased to share Double Barrel Dubbel with fans.”

Brewed with pils, amber, Munich, and aroma malts and hopped with Syrian Golding and Spalter Select, Double Barrel Dubbel enjoys a similar spicing to Abbey Ale with orange peel, coriander, cumin, star anise, and licorice root. It pours a deep burgundy color with a creamy tan head. Robust aromas of coconut, vanilla, molasses, burnt sugar, and dark stone fruit greet the drinker up front, with more subtle hints of vanilla and bourbon following in their wake. Flavor of caramel, raisin, and plums mix nicely with underlying flavors of oak, bourbon, and subtle hints of dried fruit and vanilla. A wonderfully full mouthfeel pairs with a lingering sweetness on the finish resulting in a decadent drinking experience.

This big, rich beer with an ABV of 9.9% pairs well with bold flavors like beef carbonade over mashed potatoes, robust cheeses like sharp cheddar and bleu cheese, and for dessert, a brandy-soaked fruitcake.

Double Barrel Dubbel will be available for a limited time in 12 oz four-packs and on draft beginning in late April in the following states: AK, AR, AZ, CA, CO CT, FL, GA, IL, IN, KY, MA, MD, ME, MI, MN, NC, ND, NH, NJ, NY, OH, OR, PA ,SC, SD, TX, VA, VT, WI, WV, and Washington D.C. Visit our beer finder to look for retailers near you: https://www.ommegang.com/blog/beer-finder/ (Please note, the beer finder is built on sales data so if it's not yet for sale in your area, if won't show up on the beer finder.)