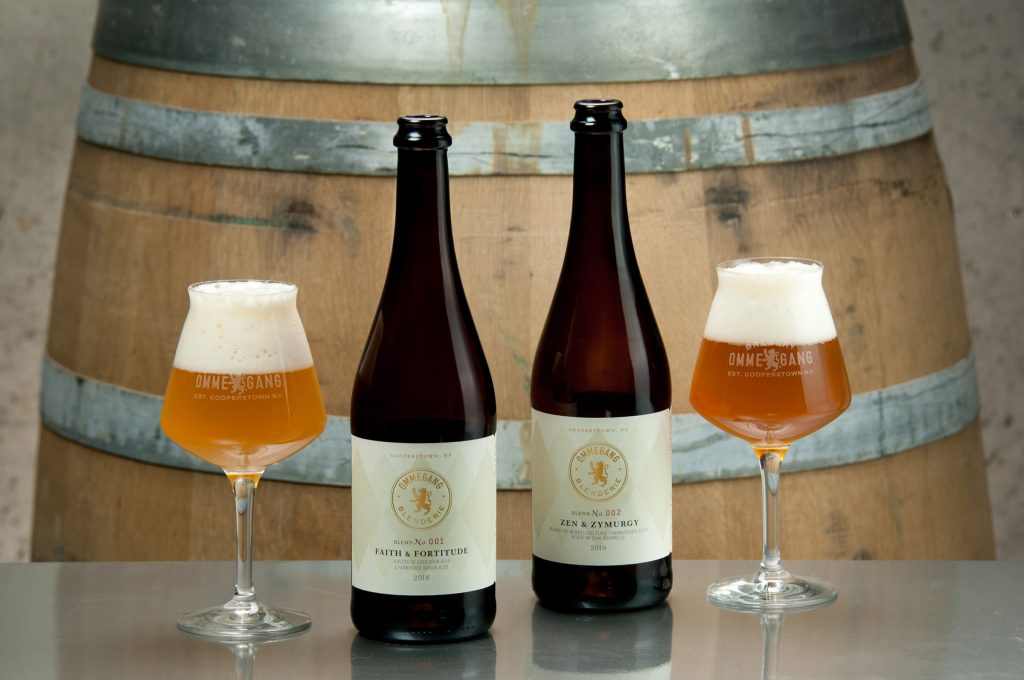 UPDATE: There's a slight delay on the release of Blend No. 1, Faith & Fortitude. As soon as we have a release date available, we'll share that information here. We're sorry for the inconvenience.

We're thrilled to share details about a new project called Blenderie Ommegang, which will focus on small-batch blended beers. Please read on for more information about Blenderie Ommegang and the first two blends, Faith & Fortitude and Zen & Zymurgy.

(COOPERSTOWN, NY) A revered Belgian tradition – the artful blending of different beers to create unique, transcendent flavors – has a new home in the New World. Brewery Ommegang of Cooperstown, NY is pleased to announce the launch of Blenderie Ommegang, a project focused entirely on very small-batch blended beers.

Ommegang’s experiments in blending began back in 2002 with the release of Three Philosophers, a beer which thrust its brewers into a fascinating world in which the balance of flavors and harmony of experience depend as much on the blend as on the brewing processes. The brewery has since released a number of blended beers, most recently Double Barrel Dubbel, a combination of barrel-aged dubbels, and Saison Rosé, a blend of two very different saisons. The brewery’s flagship blend is Pale Sour, a mix of stainless steel-aged lactic sours that has quickly become one of its best-selling beers.

“We strive to make exceptional beers for the world’s most discerning drinkers," said Ommegang Brewmaster Phil Leinhart. “With blending, we can create flavors and layers of complexity that are otherwise impossible to achieve. We’re all very excited about this project.”

The first two releases in the series feature Brewery Ommegang beers blended with beers from Liefmans Craft Blenders in Belgium and Firestone Walker Brewing Company’s Barrelworks in Buellton, California, two of Ommegang’s sister breweries in the Duvel Moortgat family. “With access to a range of beers from world-class breweries, we can multiply the possibilities and take full advantage of the amazing talents within the family,” explained Ommegang President Doug Campbell.

Blend No. 1 is Faith & Fortitude, an elegant combination of aged sour ales and farmhouse saisons. The 6.5% ABV beer pours a bright gold with a fluffy white head. Notes of apricot, citrus, and tropical fruits mix with just a hint of barnyard funk. Faith & Fortitude is medium bodied, effervescent, and has a slightly dry finish.

Blend No. 2 will be Zen & Zymurgy, a mixed fermentation sour with a delicate saison base and four distinct yeast cultures. The barrel-aged 5.7% ABV beer is honey-colored, with aromas of sweet fruit, lemon and oak and tart flavors of fruit, malt and Brettanomyces. Zen & Zymurgy is light and effervescent, with a dry finish.

Blenderie Ommegang beers will be available for purchase only at the brewery’s newly expanded and renovated facilities in Cooperstown, NY, on tap and in 750ml bottles. Faith & Fortitude will debut at SAVOR: An American Craft Beer and Food Experience on Friday and Saturday, June 1-2, in Washington, DC, and will be offered to the public in early summer. Zen & Zymurgy will be introduced at the Firestone Walker Invitational Beer Fest on Saturday, June 2 in Paso Robles, CA, and will go on sale in August. More Blenderie Ommegang releases will be announced later this year.