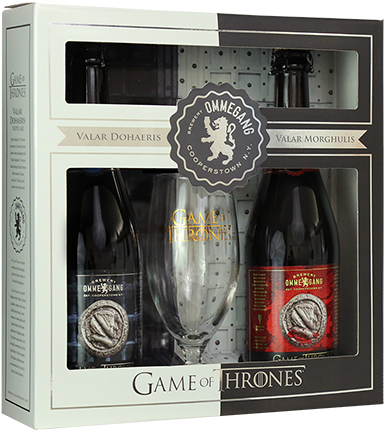 Our newest Game of Thrones-inspired beer has a name – Valar Dohaeris Tripel Ale – and it's coming to shelves and taps near you, along with a re-release of Valar Morghulis Dubbel Ale!

Cases and kegs of Valar Dohaeris and special gift packs featuring a bottle of each beer plus a beautiful glass are now working their way from our distributors to your favorite stores and bars. There are always a lot of questions about how to get the Game of Thrones-inspired beers and it’s proved helpful for us to post search tips for beer fans seeking out this release.

The national release date for Valar Dohaeris and the gift packs is Monday, October 10. That's the day most retailers across the US will begin sales. If you are in the Cooperstown area, you can buy these at the brewery store beginning Saturday, October 8 (we're open 12-5 pm daily.)

We have a beer finder that will show the locations that the beer has been sold to and you can use this to search for retailers near your zip code. The beer finder works by aggregating sales data from the distributor and it is uploaded often a few days after the sale into the account. With the great demand for this series of beers, they might even be sold out by the time it is listed on our beer finder, so we strongly encourage you to call your local retailers in advance before taking a road trip to see them.

Valar Dohaeris and the gift packs will not be sold in Arkansas, Idaho, Mississippi, Montana, Oklahoma, Vermont, Wyoming. Outside of the United States, this will be available in Ontario, Canada. There is not currently a release date set for Canada but we'll update this post when we have one.

It is illegal for us to sell online or directly to customers who are not at the brewery, so we cannot do any online orders. There are a few websites that are allowed to sell beer directly to fans and we will post those here as they come in. For starters, check out Craftshack.com.

Read more about our fall Game of Thrones-inspired releases in the press release below and keep an eye our for the new beer and the gift pack in the next few weeks!

July 19, 2016: (COOPERSTOWN, NY) After an exciting season that saw the Starks reclaim the North and Cersei take the Iron Throne as the first queen of Westeros, Brewery Ommegang and HBO Global Licensing are introducing a new beer and bringing back a previous brew to steady the nerves of fans as they anxiously endure the show’s off-season break. Valar Dohaeris Tripel Ale is the latest beer in the series and pays homage to Arya’s season-long struggles within and around the House of Black and White. This beer will be available in 750ml single bottles, on draft and also paired alongside its previously released sister-brew Valar Morghulis in a collectible gift pack which features a commemorative glass as well. Suggested retail price is $9.99 for the individual bottles and $22.99 for the gift pack. The official nationwide release to retailers is October 10.

Fans of Game of Thrones know that “Valar Morghulis” means “All Men Must Die” in High Valyrian and is traditionally answered with the phrase “Valar Dohaeris,” which means “All Men Must Serve.” Label art for both bottles features the two-headed coin, given to Arya Stark by Jaqen H’ghar, which gained her passage to Braavos at the end of Season 5. Arya spent most of Season 6 in Braavos training to become a faceless assassin, making the naming of the latest beer and the decision to re-release Valar Morghulis a no-brainer.

“When we got a sense of the season’s key plot points, we knew right away Valar Dohaeris was the new beer name and that bringing back Valar Morghulis was a must,” says Bill Wetmore, General Manager and Marketing Director for Brewery Ommegang. “And I think HBO’s fantastic idea to have the gift pack mimic the House of Black and White is really going to be a hit with fans. It looks killer and I think fans are going to scoop them up pretty quickly for gifts or for their own collections.”

“Of the classic Belgian styles, the dubbel and the tripel are two of our favorites to brew, and both are styles we’re particularly well known for,” says Ommegang Brewmaster Phil Leinhart. “I love the idea of releasing them together side-by-side. It is such a great way to experience them.  They are also pretty hearty and should age nicely over time, so fans can stock up to last them through the winter and to fill the void until next season.”

Originally released in 2014, Valar Morghulis Dubbel Ale is a name and style selected by fans in a December 2013 social media poll. One of the fastest-selling beers in the series, fans enjoyed this classic Belgian-style because it is fairly complex and full of intrigue – much like the show itself. Valar Dohaeris Tripel Ale is, much like a “faceless man,” not what it first appears to be; it shares the complexity of its sister-brew and a strength masked and belied by its lighter color.

Valar Morghulis is 8% ABV, brewed with pilsner and specialty malts and hopped with Apollo and Hallertau Spalt Select hops. The hue is deep amber-brown and aromas include caramel, toffee, ripe fruit, banana and slightly burnt sugar. The taste is well-balanced with rich malty sweetness, caramel and sugar, and just a touch of bitterness to balance. The finish is surprisingly dry and light on the tongue, a surprising counter to its aroma and initial taste.

Valar Dohaeris is 9% ABV, brewed with pils, wheat and oats, flaked barley, and hopped with noble hops. It pours a beautiful copper-tinted hue with a full, fluffy white head. Sweet grain and honey are prevalent in the aroma. The flavor opens with a bright sweetness thanks to the Belgian candi sugar used in brewing. The finish is moderately dry and effervescent with just a hint of Belgian yeast character.