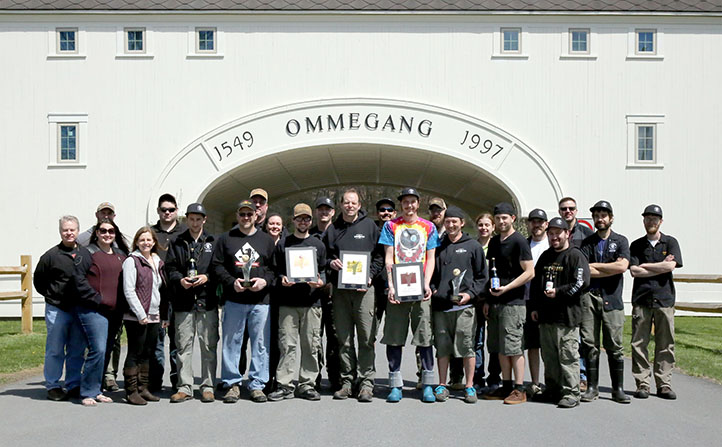 Hi, friends.
Our feet still haven't quite touched the ground since Friday night when our brewery, our team, won top honors at the 2016 World Beer Cup SM in Philadelphia. Not only did Rosetta win gold and both Three Philosophers and Gnomegang win bronze in their respective categories but Ommegang was named the champion mid-size brewery and brewmaster for the 2016 competition. We're humbled and honored and so proud of each and every member of our production team: brewing, packaging, quality, maintenance, and warehouse-they all had a hand in making this happen.

Here's the press release will all the details about the event:

(COOPERSTOWN, NY) Cooperstown, New York’s tranquil Brewery Ommegang sent up a boisterous cheer on Friday night when they were named the Champion Brewery and Brewmaster for mid-size brewing companies, and won three individual beer awards at the 2016 World Beer Cup SM competition. The brewery won a gold medal for its newest beer, Rosetta, in the Belgian-style fruit beer category, a bronze for Three Philosophers in the Belgian-style dubbel and quadrupel category, and a bronze for Gnomegang in the Belgian-style tripel category. The World Beer Cup’s SM biennial awards ceremony was held in Philadelphia on Friday, May 6.

Breweries that produce between 15,001 and six million barrels a year are considered mid-size and in 2016, nearly 350 breweries participated in the World Beer Cup SM competition at that level. Ommegang was one of only six breweries to win three individual beer awards at the event.

“This is a tremendous achievement for our brewery and a testament to the skill and passion of our brewing, packaging, quality, maintenance, and warehouse teams,” said Ommegang Brewmaster Phil Leinhart. “We never go to an event expecting to win. We believe our beers to be very high quality and we know they’re beloved by many, but so are many beers from many breweries all over the country and the world. To win a single award at the World Beer Cup SM is quite an achievement, but to win three along with the Champion Mid-Size Brewery Award leaves us a bit speechless.”

The Brewers Association, a not-for-profit trade group that protects and promotes America’s small, independent craft brewers, created the World Beer Cup SM competition in 1996 to celebrate the art and science of brewing. The 1996 competition was held with 600 beers and 250 breweries competing from 20 countries. Held biennially since then, the World Beer Cup SM has grown into one of the largest and most prestigious events in the international brewing industry. This year’s competition boasted 6,596 beers judged in 96 categories, beers from 1,907 breweries from 55 countries.  Judging was completed by approximately 260 judges from 31 countries, 75% of them from outside the United States.

Brewery Ommegang’s sister brewery Boulevard Brewing Company from Kansas City, MO was also a big winner that night. They were awarded a pair of awards: gold for The Sixth Glass in the Belgian-style dark strong ale category and silver for Tank 7 in the American-Belgo-style ale category.